Eduards Kraucs, a Latvian photographer and film operator, was born in the family of Jānis and Vilhelmīne Kraucs on 21 August. 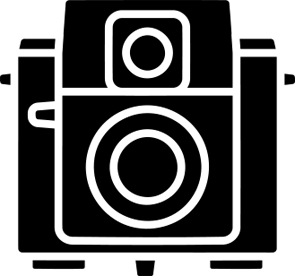 Eduards Kraucs began working as a photojournalist, supplying his photographs to Latvian and foreign press. 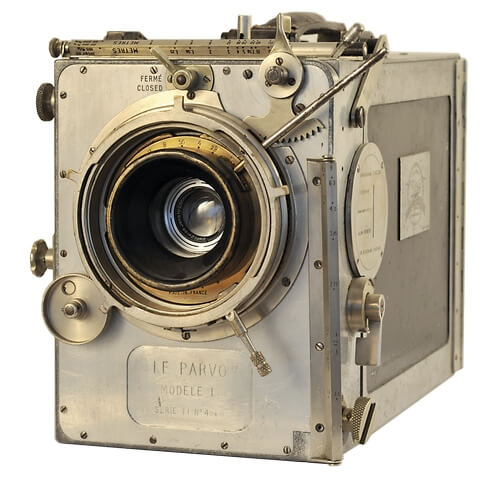 The film camera manufactured by Le Parvo (France), which was used by Eduards Kraucs, photographer and film operator, in the 1930s. The film camera is stored in the collection of the LAC Riga Film Museum.

Eduards Kraucs became a reporter of the newsreel Nedēļas apskats (Weekly Review) of the German film company UFA in Riga. 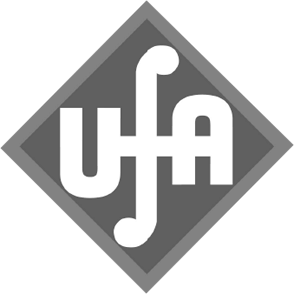 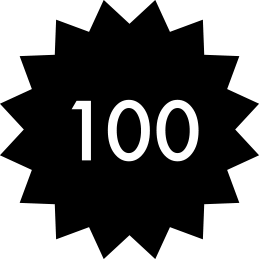 Eduards Kraucs celebrated the making of the hundredth issue of the newsreel.

Eduards Kraucs opened his photography workshop in Riga –
at 57 Dzirnavu Street at that time. 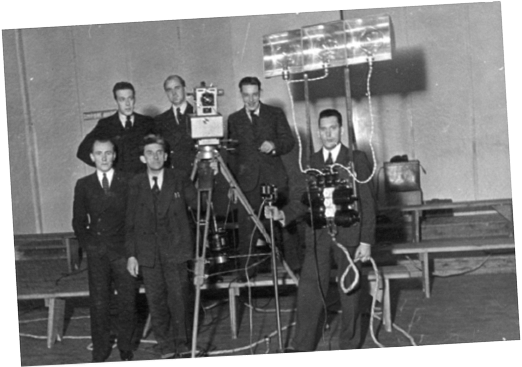 Film crew of Latvian newsreels in the 1930s. First row, second from left is Voldemārs Blumbergs and third is Zvirbulis. Second row, from left is Nikolajs Jansons, Eduards Kraucs and Edgars Blumbergs. Photo by unknown author. Collection of the LAC Riga Film Museum. 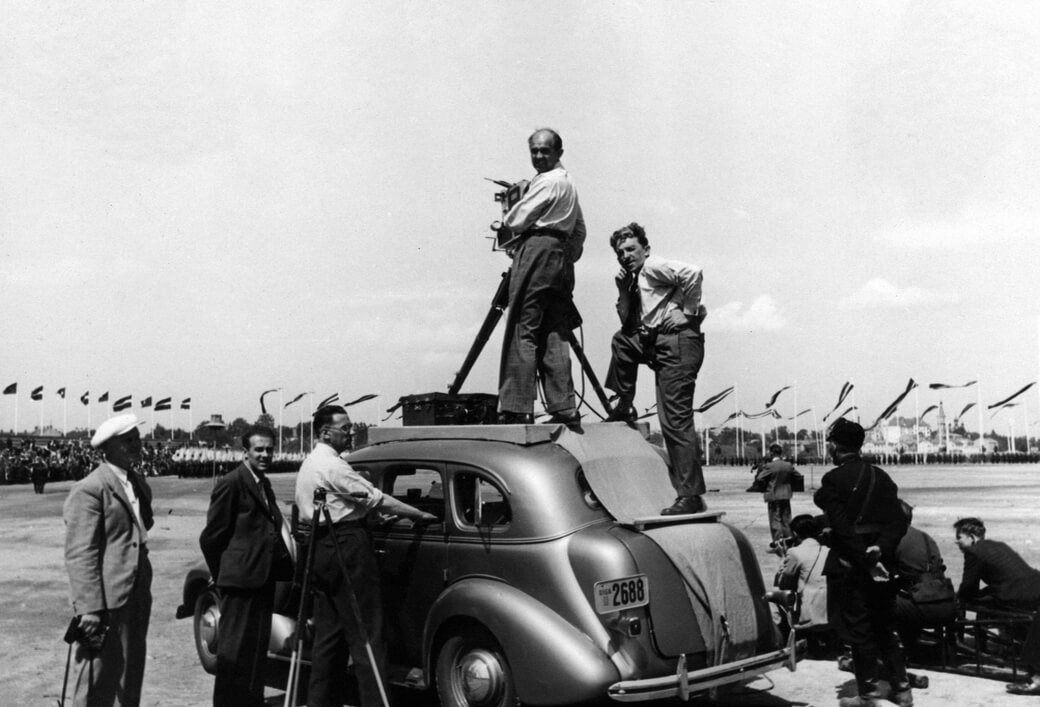 Film crew of Latvian newsreels on Victory Square in Riga, 1939. Eduards Kraucs, photographer and film operator on a car, holding a film camera, with Voldemārs Blumbergs beside. Third from left is Kārlis Zēbergs. Photo by unknown author. Collection of the LAC Riga Film Museum. 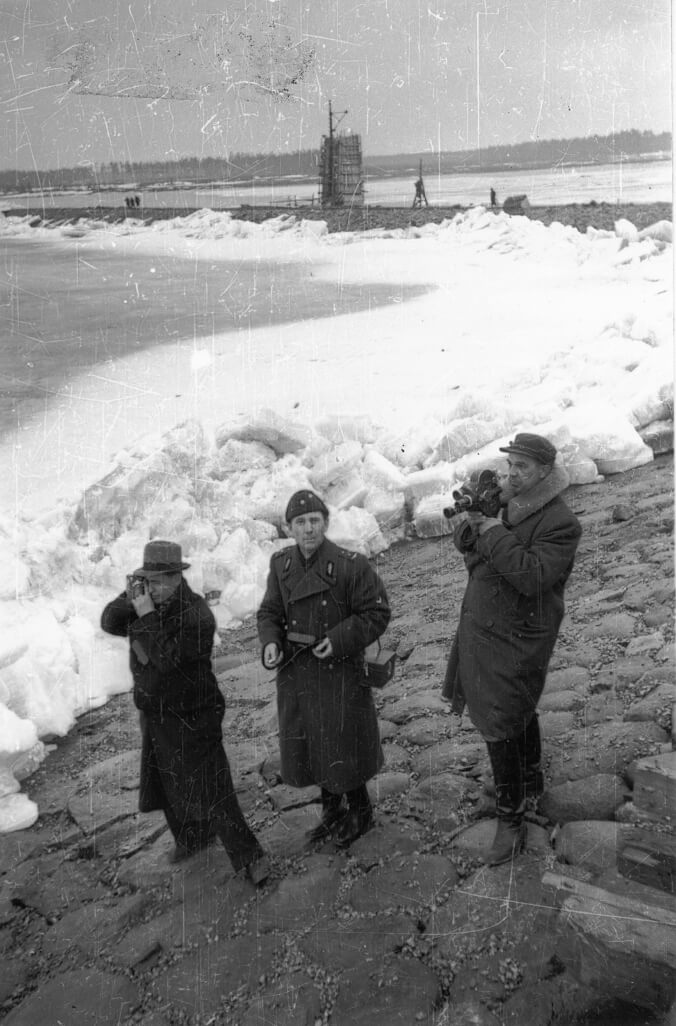 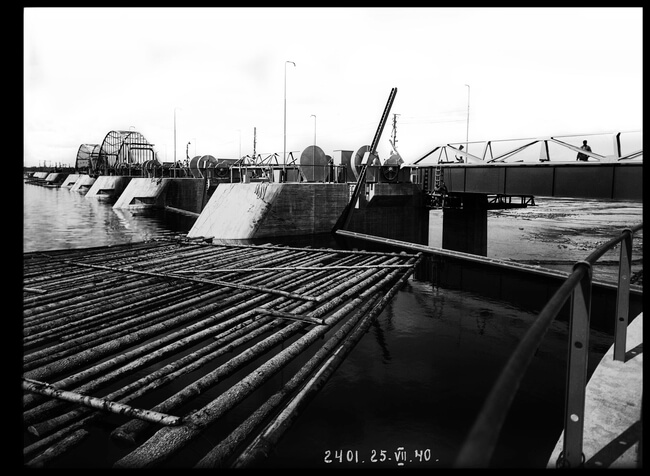 Eduards Kraucs terminated his work in Alexander Film Company and kept on taking photos while travelling across
the U.S.

Eduards Kraucs was born as the youngest of five children in the family of Jānis and Vilhelmīne Kraucs in Riga on 21 August 1898. During his school years at Riga City Non-Classical Secondary School (now Riga State Gymnasium No. 2), Eduards began to take an interest in cinema, which was a vibrant phenomenon in the cultural life of that time. In 1907, he watched almost every cinema performance at The Royal Vio cinema in Riga, located at the present-day Kronvalda Boulevard. In an interview of 1965 with Edmunds Zirnītis to the illustrated Latvian magazine Tilts (The Bridge) issued in Minneapolis, U.S., E. Kraucs said1 that he started to get interested in films at the age of 13 and even wrote to the filmmaking company Pathé in Paris asking them to send him a film camera catalogue. When a representative of the company showed up at the Kraucs’ house in Riga and asked for the film operator Kraucs, the young man, being aware that he could not reveal himself due to his age, apologised and said: “Unfortunately, the film operator Mr. Kraucs is not at home.”

During World War I, the Kraucs family emigrated to Moscow, where Eduards graduated from Nechayev Grammar School and studied Architecture at the Moscow Mining Academy for one year.

In 1921, E. Kraucs returned with his parents to his hometown, Riga and volunteered to join the Latvian Army. In 1923, he began working as a photojournalist, supplying his photographs to Latvian and foreign newspapers, as well as the press service of the Ministry of Foreign Affairs.

In 1930, E. Kraucs became a reporter of the newsreel Nedēļas apskats (Weekly Review) of the German film company UFA in Riga. In June 1931, he celebrated the making of the hundredth issue of the newsreel. In November, the first issue of Latvia’s Sound Chronicles was released, which was recorded using the sound-recording equipment of FOX Film Corporation. In 1934, E. Kraucs partnered with brothers Valdemārs (1889–1972) and Edgars (1899–1958) Blumbergs and started to create sound newsreels. E. Kraucs founded Latvijas skaņu hronika (Latvia’s Sound Chronicles). Eduards Kraucs is considered the founding father of Latvian sound newsreels in the history of culture of Latvia.

Between 1929 and 1940, E. Kraucs shot more than 550 newsreels and 20 cultural films. He filmed prominent personalities of Latvian culture, documented the most significant events in the social life and economy of the country as well as perpetuated Latvia’s most picturesque places.

Along with the creation of newsreels, E. Kraucs was actively engaged in photography and in 1933 he opened his photography workshop in Riga – at 57 Dzirnavu Street at that time, actively publishing his photos in press. From 1936 to 1940, Eduards Kraucs also filmed and took photos of the construction of the largest industrial structure in Latvia –Kegums Hydropower Plant. It was an excellent opportunity for Eduards Kraucs to assert his national self-awareness and the essence of a documentarist. The collection of the glass plate photo negatives reflecting the construction of Kegums Power Plant was included in the Latvian National Register of the UNESCO Memory of the World Programme, acknowledging the belonging of the collection to the cultural heritage of Latvia, a value that points to the interaction of people’s knowledge and skills, achievements and unique industrial history.

Kraucs was interested not only in events in Latvia, but also brought along his film camera to Estonia and Lithuania. Thanks to his vast experience as a photographer and film operator, E. Kraucs could be found everywhere, filming the events of both the Soviet and German occupational power in Latvia in the 1940s. “I had the opportunity to witness and film the events of both joyful and sorrowful days in Latvia,” said E. Kraucs. Risking his life, he documented both political events and warfare on the frontlines. Photographer and film operator Nikolajs Jansons (1909–1989) writes in his memoirs that E. Kraucs filmed the burning Old Riga, the Germans entering Riga from the city’s Moscow Suburb and the Cheka’s basements (the basements of the Corner House, now at 61 Brīvības Street, Riga)2. During the German occupation, E. Kraucs’ film Sarkanā migla (The Red Fog) about the Soviet or “red” terror in Latvia was produced.

Kraucs’ contemporaries write that for the sake of a better video or photo shot he was ready to lie on his back for a long time or jump into the water. Once reckless Kraucs, who wanted to photograph the rooster on top of the tower of St. Peter’s Church in Riga as close as possible, was rescued from falling through the small tower roof window in the spire of the church by his assistant J. Baltiņš.

The work of E. Kraucs as a documentarist in the years of Soviet and German occupations had an impact on his future life. In October 1944, E. Kraucs and his family fled the country and ended up at Hochfeld refugee camp, Augsburg, Germany. E. Kraucs filmed the events in camps for five years, taking about 25,000 photographs (the collection of the photo negatives is stored in the archives of the Hoover Institution at Stanford University in California, U.S.)3. In October 1950, Kraucs was invited to work in the film industry – in Alexander Film Company, and together with his wife Natālija he moved to Colorado Springs, U.S. Kraucs was in charge of the optical tricks and effects in advertising. To create them, he even invented and patented 12 new ideas, receiving the company’s awards. Thanks to its tireless activity, enthusiasm and creative imagination, E. Kraucs continued his work in Alexander Film Company until 1965. When he stopped working at the age of 67, he kept on taking photos while traveling across the U.S.

Looking back at his accomplishments, E. Kraucs said in an interview with Edmunds Zirnītis that “the view of the world and things through the lens and the ability to record what is seen in a film often capture the heart and confuse the mind; there is a desire to continue doing so over and over again. (..) During my life since 1917, I have taken and processed ten million feet of films, negatives and positives, black and white and colour, filming in Latvia, Sweden, Estonia, Lithuania, Russia, Czechoslovakia, Italy, Germany, Austria and the United States. These ten million feet could be stretched across the entire continent of the United States from one coast to the other”.

Although deep inside Eduards Kraucs dreamt of returning to Latvia – not only because he missed the Baltic Sea, the Daugava River, the Gauja River, the birch groves and the recreation in Bullu Village by the Lielupe River, but, above all, because he wanted to work some more within his specialty, doing some more good for his homeland. Unfortunately, this dream never materialised. E. Kraucs died on 14 September 1977 in emigration, in Colorado Springs, U.S.